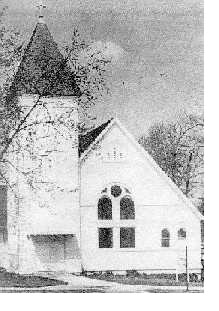 he oldest record of Catholics moving into Mercer County date back to the spring of 1775 when James Harrod founded Fort Harrod. Fort Harrod was the oldest settlement of Europeans in Kentucky. With Captain Harrod came Dr. George Hart and William Coomes (a school teacher) and their wives. Dr. Hart moved to Louisville and Mr. Coomes moved to Bardstown before 1780 because of their faith since these Catholic communities were served by priests on a regular basis. From its inception at Pottinger Creek in 1785, the Catholic community in Bardstown grew. Priests went forth from that area to evangelize different Communities and to serve the widely scattered Catholic flock. Loretto, a small settlement near Bardstown was home to Fr. Stephen Badin who was the first priest to celebrate Mass in Mercer County. The church grew in Mercer County and adjacent areas. Father Badin (first priest ordained in the U. S.)founded the first church in what was then Mercer County in Danville (which later became the county seat of a newly established county in the 1840’s). During the early 1800’s Father Badin, other priests from areas around Bardstown,and from St. Rose Priory in Springfield came to administer the sacraments to the Catholics of Mercer County. Rev. Francis Patrick Kenrick O.P., later Archbishop of Baltimore, made a missionary trip to Harrodsburg. The pastor of St. Augustine in Lebanon ministered to the faithful of the area from 1824 to 1829. In 1808 the new Diocese of Bardstown was erected with Bishop Benedict J. Flaget as its first bishop. He established St. Joseph’s Cathedral in Bardstown in 1829. After Fr. Joseph Thomas Ryan O.P. was ordained in 1848, he became a dedicated apostle in the area offering Mass in the homes of the Catholics of our community, such as Jane McGarvey in Burgin.

A few years later a United States purchased the Graham Springs Resort and made it into a military hospital. This building contained a chapel in which Fr. Ryan offered Mass for those at the hospital and the Catholics of the surrounding area. Later this chapel was destroyed by fire. Fr. Ryan purchased a piece of property on Chiles Street from Sarah Sutton, the mother-in-law of Dr. Christopher Columbus Graham in September 1857. She was renting to a member of the Know Nothing Party. He resented the faith of the new owners, resisted them, and they could not take full possession of their property until he moved out in 1858. An account in the “The Catholic Guardian” of Louisville related the opening dedication of St. Peter’s church in Harrodsburg on May 16, 1858. Father Ryan officiated at the dedication at which time there was the Baptism of a Miss Ann Taylor. During the years 1864 through 1867 the Catholic Almanac reports that Dominican priests from St. Rose Priory celebrated Mass once a month on Chiles Street. It then tells that priests from Lebanon offered Mass every two months. Various priests attended to the needs of the Church in Harrodsburg, until November 1891 when Fr. Brady obtained permission and oversaw the construction of a new church on Chiles Street. This is what locals called the “white church”. It was opened and blessed by Bishop William G. McClosky on August 10, 1893. The altar, said to have been donated by Rev. Paul Volk, was built in Germany and shipped to Harrodsburg. Some claim it arrived in one piece. The “Record” (the Catholic newspaper in Louisville) of November 1901 gives an account of the organization of a Sunday school. A Catholic Church, St. Nicholas, with an adjoining cemetery was established at Rose Hill in 1895 by Father Paul Volk. Shortly after his arrival, he noticed that there were a number of families in the Rose Hill area having a difficult time attending Mass in Harrodsburg, especially the elderly and the children. He traveled by horseback to the settlement as did all the priests before cars became common. He held Mass in private homes and in the Hungate School. Father Volk gathered children for instruction and received several families into the Catholic Church, giving many children and adults their first communion. He then built the St. Nicholas Church on property contributed by Mr. Thomas Cox. The church and cemetary were dedicated on December 5, 1895. Then after Rev. John Kalaher collected $1200, a rectory was built after which the priest alternated living at Harrodsburg and Rose Hill. Rev. Kalaher became the first resident pastor of the Harrodsburg – Rose Hill Community on June 30, 1905. Due to its condition, St. Nicholas Church was razed in 1949 but the rectory still exists. The memebrs were directed by the Bishop to attend Mass in Harrodsburg. Saint Andrew Catholic school was opened under the leadership of Fr. Julian Pank in December 1954. It was dedicated in May 1955. But due to the small student body and unavailability of the Ursuline Sisters, who staffed it, it was closed in the spring of 1985. Father Stanley Osborne built the last St. Andrew’s Church building on Chiles Street in 1975. In 1979 a rectory was added. The “1893” altar was reconfigured for use in the new sanctuary by Mr. James Huff.

In 1988 Pope John Paul II saw fit to establish a new diocese in south eastern Kentucky with its See in Lexington. Harrodsburg was taken from the Archdiocese of Louisville (previously Bardstown) and made part of the new Diocese during the pastorate of Father Henry Schuhmann. In 1991, the first directory of the church was published with 183 families. The convent (often called the Hat Factory because of a tailoring business run by its builder and first resident: Captain James Sutton with his wife, Sarah), was the oldest residence in Harrodsburg until it was demolished in 2003. It had been extensively refurbished

in 1994 under the direction of Father Joseph Muench to accommodate Sister Maria Browne, O.P., the new Pastoral Associate. Shortly after the convent was refurbished the parish and Father Muench embarked on a new pioneering adventure. Due to frequent flooding and the growth in the parish community a building program was established. Property was purchased two miles south of the Chiles Street Church. New construction was begun in 2000 and completed with the dedication rite on September 16, 2001. This made it the first church built in the Diocese of Lexington in the Third Millenium. Bishop J. Kendrick Williams led the dedication. Over 600 people attended. The present Church is blest to have over 233 registered families.